Binge Eating Among Men Steps Out of the Shadows

While about 10 percent of patients with anorexia and bulimia are men, binge eating is a problem shared almost equally by both sexes. A study published online in October and then in the March issue of The International Journal of Eating Disorders found that among 46,351 men and women ages 18 to 65, about 11 percent of women and 7.5 percent of men acknowledged some degree of binge eating.

After downing 70 chicken wings in about an hour, Andrew Walen realized he had a problem.

Oh, he had known something was wrong over the years. Normal people don’t consume 4,500 calories worth of food in one sitting, or order takeout for four when dining alone. But it took a maniacal feeding frenzy for him to finally accept the reality: He was a binge eater, and he had absolutely no control around food.

“Ultimately, it was about numbing out and self-loathing,” said Mr. Walen, now 39 and a therapist in Columbia, Md. “There was this voice in my head that said, ‘You’re no good, worthless,’ and I turned to food.”

Mr. Walen is one of an estimated eight million men and women in the United States who struggle with binge eating, defined as consuming large amounts of food within a two-hour period at least twice a week without purging, accompanied by a sense of being out of control.

While about 10 percent of patients with anorexia and bulimia are men, binge eating is a problem shared almost equally by both sexes. A study published online in October and then in the March issue of The International Journal of Eating Disorders found that among 46,351 men and women ages 18 to 65, about 11 percent of women and 7.5 percent of men acknowledged some degree of binge eating.

“Binge eating among men is associated with significant levels of emotional distress, obesity, depression and work productivity impairment,” said Richard Bedrosian, a study author and director of behavioral health and solution development at Wellness and Prevention Inc., which works with employers and health plans.

But while binge eating is challenging for women who suffer from it, the perils are perhaps greater for men, who rarely seek treatment for what many believe is a “women’s disease.” Unlike bulimia and anorexia, binge eating does not even have a distinct listing in the current D.S.M., as the diagnostic guide for mental health professionals is known.

“Guys generally don’t come forward for any reason,” said Ron Saxen, 49, author of “The Good Eater,” a memoir of his struggle with binge eating, which began when he was about 11. At his worst, Mr. Saxen was consuming 10,000 to 15,000 calories’ worth of Big Macs, French fries, chocolate milkshakes, candy bars, ice cream and M & Ms, often within an hour-and-a-half window.

Those men who do seek treatment often have difficulty finding a facility or therapist to work with them — even the literature is predominantly female-centric. Before Vic Avon was given a diagnosis of anorexia in 2006, for example, he scoured the Web for information relating to men and eating disorders. “Everything I saw was written for and by women,” said Mr. Avon, 29, a building contractor in Brick Township, N.J.

Mr. Avon seesawed between anorexia and binge eating (not uncommon), at one point weighing 300 pounds. “I was so ashamed because it was a girl’s illness, I thought. I didn’t have any guys to look to.”

Many binge-eating men do not even recognize that anything is wrong. About 70 percent of people with binge eating disorder are overweight or obese, but a higher weight is generally more culturally acceptable for men than for women.

“There’s nothing wrong with a college guy eating a whole pizza by himself, but with women they would be horrified,” said Roberto Olivardia, a clinical psychologist who specializes in the treatment of body image disorders and eating disorders in men and is an author of “The Adonis Complex.”

Even if they are disturbed by their food intake, few men make the connection between gorging and emotional distress. “With men it’s usually a disconnect,” said Mr. Walen, the former binge eater turned therapist. “It’s about ‘I want to eat,’ not ‘I’m coping with an emotional trauma.’ ”

Adam Lamparello’s binge eating was both physical and psychological, the result of the starvation that ensued during his six-year bout with anorexia, and his attempt to fill the “emptiness, loneliness and emotional void” that he felt in his life.

“Those with binge eating disorder often do not have meaningful relationships with other people, are isolated, believe that life has no purpose or have suffered prior traumatic events and turn to food for emotional comfort,” said Mr. Lamparello, 36, a lawyer in Hasbrouck Heights, N.J., who recently published “Ten-Mile Morning: My Journey Through Anorexia Nervosa.”

Here are some articles and blogs about binge eating disorder 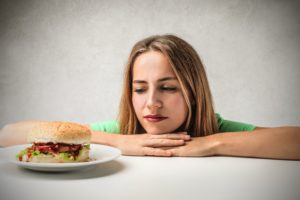